Stephen Banham: One Day in Our Park

Developed in consultation with the Kensington community, Stephen Banham’s concept for the flood wall creative design is based on the local community’s close connection to JJ Holland Park. One Day in our Park explores the intimate and everyday stories of the local community within the park in a playful and imaginative way.

The creative design comprises of mosaic tiles to celebrate the industrial heritage of Kensington, while also providing long-lasting strength and durability. As a common civic and industrial material often seen across the facades of shops and factories, the tiles also reference Kensington’s industrial heritage.

The phrases on the wall were inspired by community input, with some phrases installed verbatim. The green palette was carefully selected to reference the changing shades of green over the course of a day in the park, ensuring the flood wall is sympathetic to its parkland surrounds.

Installation of One Day in Our Park began in June 2021.

Often described as a "typographic evangelist", Stephen Banham is a typographer and educator. His typographic explorations across some 18 books primarily centre on the cultural life of letterforms.

Banham’s design work and writings have appeared in countless international publications and design events, from Barcelona to Beirut, New Zealand to New York. A board member and assessor of the International Society of Typographic Designers, Dr Banham also lectures in typography in the RMIT School of Design.

Recently, Stephen developed a creative artwork that was installed along Swanston Street at the Metro Tunnel’s future State Library Station. Here, There offers a continuous and playful typographic loop, generating a sense of endless activity, energy, time and, above all, the sense of repetition we experience as we constantly move from here to there. 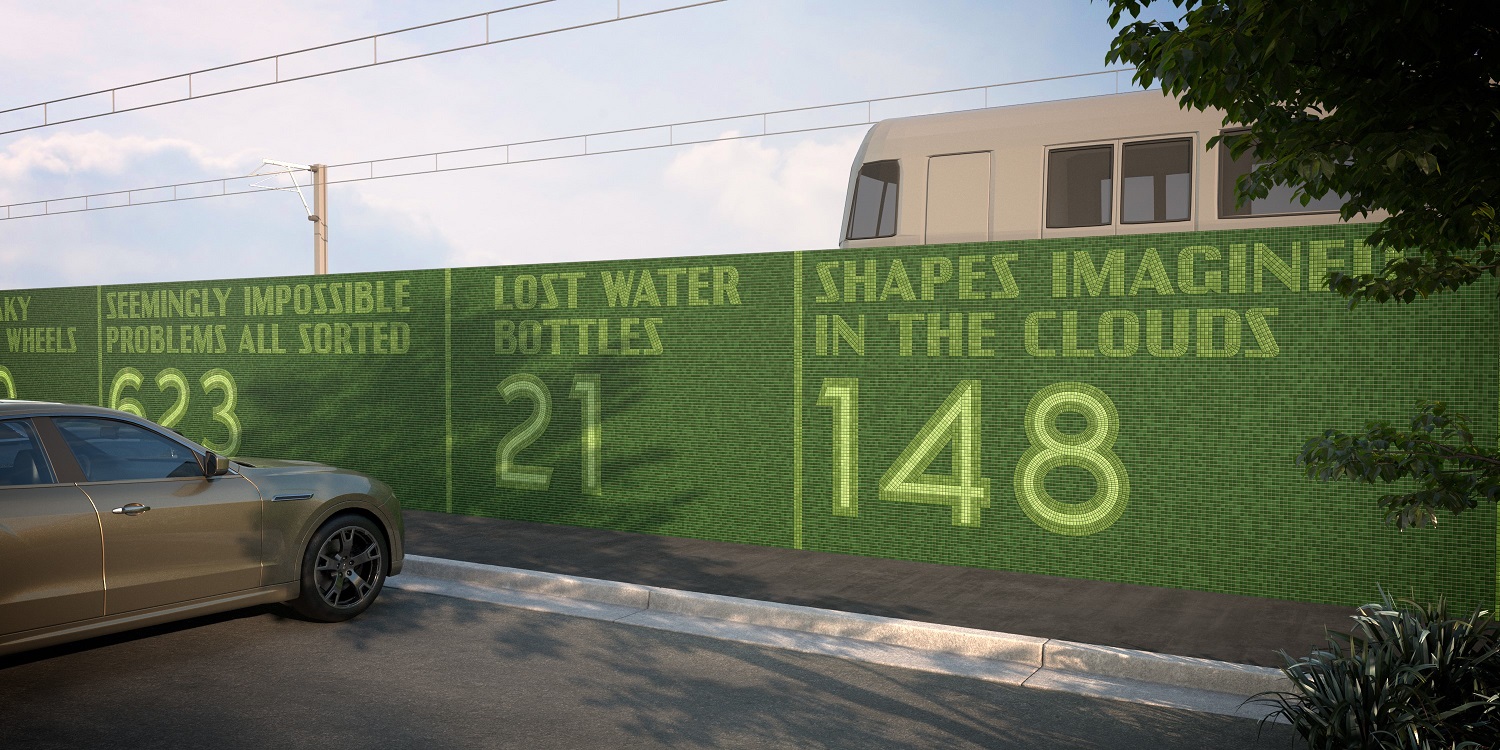 A flood wall is a retaining wall which provides the Metro Tunnel with protection against extreme flooding events.

The Metro Tunnel's western entrance is located alongside the existing rail corridor near South Kensington station and JJ Holland Park. A decline structure, or descending tracks, has been built so that trains can enter the Metro Tunnel.

Due to the proximity of the tunnel entrance to the Maribyrnong River, a 300 metre-long flood wall has been built.

Extensive community feedback in 2018 and 2019 highlighted the visual prominence of the flood wall in the Kensington area. A creative design treatment addresses the high value of the experiences and views from JJ Holland park to the flood wall, and offers a sympathetic urban design response to the park while also celebrating the Kensington community's connection to it.

An advisory panel was established to select a specialist designer and oversee the design process. The advisory panel shortlisted five designers to develop concepts for consideration. The advisory panel consisted of members of the Rail Infrastructure Alliance (RIA), Rail Projects Victoria (RPV), City of Melbourne, Creative Victoria, Office of the Victorian Government Architect, and an independent First Nations architect.

Each designer then presented their concepts to the panel, which were assessed against criteria including response to the Creative Design Brief themes, originality and ambition of ideas, design feasibility of materials and construction methodology, and the technical capability of the designer to work with the project's architecture, urban design and engineering teams.

Due to the technical requirements of the commission, as well as the size and scale of the site, an arts curator was appointed to curate a longlist of established designers to develop concepts for consideration.

The designers were considered based on their previous creative and artistic work of comparable scale and technical complexity, as well as the community engagement aspects of their practice.

Engagement activities with the Kensington community were undertaken by Rail Infrastructure Alliance (RIA), the contractor delivering the Metro Tunnel western tunnel entrance on behalf of Rail Projects Victoria (RPV), to help inform the design of the 300-metre flood wall at Childers Street.

In 2019, community consultation determined the following themes as important to the design: the rich heritage, diversity and history of the local area; sport, recreation and local community; the landscape and nature; and enhancing the unique character of the precinct and presence of JJ Holland Park. These themes helped form the basis of a design brief that Stephen Banham, the selected artist, was asked to respond to when developing his creative concept.

In 2020, RIA and Stephen Banham engaged directly with the Kensington community for inspiration and ideas as Stephen further refined his design. This stage of engagement included a community survey available to e-news subscribers and online via the Metro Tunnel Project website, a school drawing competition via Kensington Community Children's Co-operative and a ‘meet the artist’ session with Kensington Community Reference Group members, City of Melbourne and other previously consulted groups.

We have worked closely with our contractor, Stephen and the local community to strike a balance between incorporating community feedback and realising the designer’s creative vision for the Kensington flood wall.

Installation of the flood wall design began in June 2021. Installation will occur in stages throughout the second half of 2021 and will be coordinated with reinstatement works along Childers Street.