Construction is underway on the Metro Tunnel which will untangle the City Loop so more trains can run more often across Melbourne.

The Metro Tunnel will create a new end-to-end rail line from Sunbury in the west to Cranbourne/Pakenham in the south east, with bigger and better trains, next generation signalling technology and five new stations.

The Metro Tunnel will create capacity on the network to enable more than a half a million additional passengers per week across Melbourne’s train network to use the rail system during the peak periods. See the peak capacity increase for your train line.

Melbourne Airport Rail services will also run through the Metro Tunnel to maximise access for all Victorians and provide passengers with an under-30-minute service from the airport to the CBD. 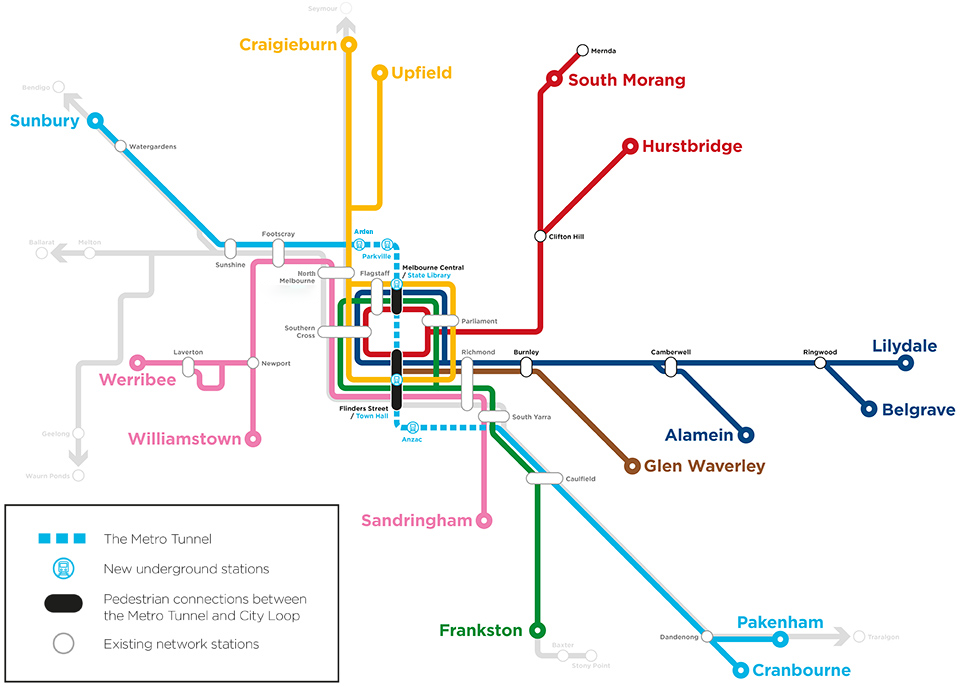 Take a virtual tour of the Metro Tunnel Project with a series of deep dives into different aspects of the project.

Fly through the Metro Tunnel

In February 2020, our first tunnel boring machine completed the leg of tunnelling from North Melbourne to Kensington. Learn more about how we reached this milestone, and how the twin nine-kilometre tunnels were constructed.

Our roadheaders work together deep underground to mine the station caverns for our State Library and Town Hall stations. Watch one of the massive machines break through into the central cavern of the future Town Hall Station.

How we're building our CBD stations

Our two CBD stations are being constructed with a trinocular design, in which three overlapping tunnels are mined to create a wide open space that allows the concourse and platforms to integrate on a single level. See how this design is coming together at the site of State Library Station.

How our tunnel boring machines operate

In August 2019, as our first tunnel boring machine prepared to launch towards Kensington, our Director of Tunnels and Underground Stations explained the tunnelling process for the project.

Walk aboard a tunnel boring machine

Learn more about how our tunnel boring machines work underground, and the conditions that operators work in deep under Melbourne.