The construction of the two new stations under Swanston Street in the heart of the city presents a range of engineering and construction challenges.

To keep Swanston Street open and trams running while the Metro Tunnel is built, access shafts up to 11 storeys deep have been dug adjacent to Swanston Street at Franklin Street (east and west of Swanston Street), A'Beckett Street, La Trobe and Little La Trobe Streets, City Square, Federation Square and behind Young and Jackson Hotel.

These shafts are used to transport machinery, equipment and workers underground. Equipment is then used to excavate and line the stations below the surface of Swanston Street.

This construction approach minimises disruption at surface level and is commonly used overseas, particularly in constrained city environments. The above ground disruption to businesses, cyclists, pedestrians and surrounding streets is greatly reduced as a result.

To better respond to the unique ground conditions in the CBD, and to provide more spacious and accessible station platforms, an innovative trinocular design has been proposed for the State Library and Town Hall stations. A trinocular design combines three overlapping tunnels that integrate the concourse and platforms on a single level to create a wide, central tunnel space, improved passenger circulation and vertical transportation. Tunnelling under the CBD

The stations will be built as 'trinocular' caverns. Three overlapping tunnels will be mined by the roadheaders to create wide platforms with supporting columns and vaulted ceilings. The total platform width will be around 19 metres – one of the widest metro platforms in the world.

In 2021, following roadheader excavation of the tunnels through the CBD stations, tunnel boring machines carved out the twin tunnels between State Library Station and Town Hall Station around 30-40 metres below Swanston Street. City Square has been temporarily occupied to create an access shaft, and will ultimately become a station entrance. A construction site facing onto both Swanston Street, Flinders Street (around, but not including, the Young and Jackson Hotel) has been established. Another construction site is located at the station's Federation Square entrance at its northwest corner. A passenger connection will be provided from the new Town Hall station to Flinders Street station via the existing Campbell Arcade.

Construction activities within the CBD will include:

Works are underway to remove the acoustic shed at City Square by mid-2022. 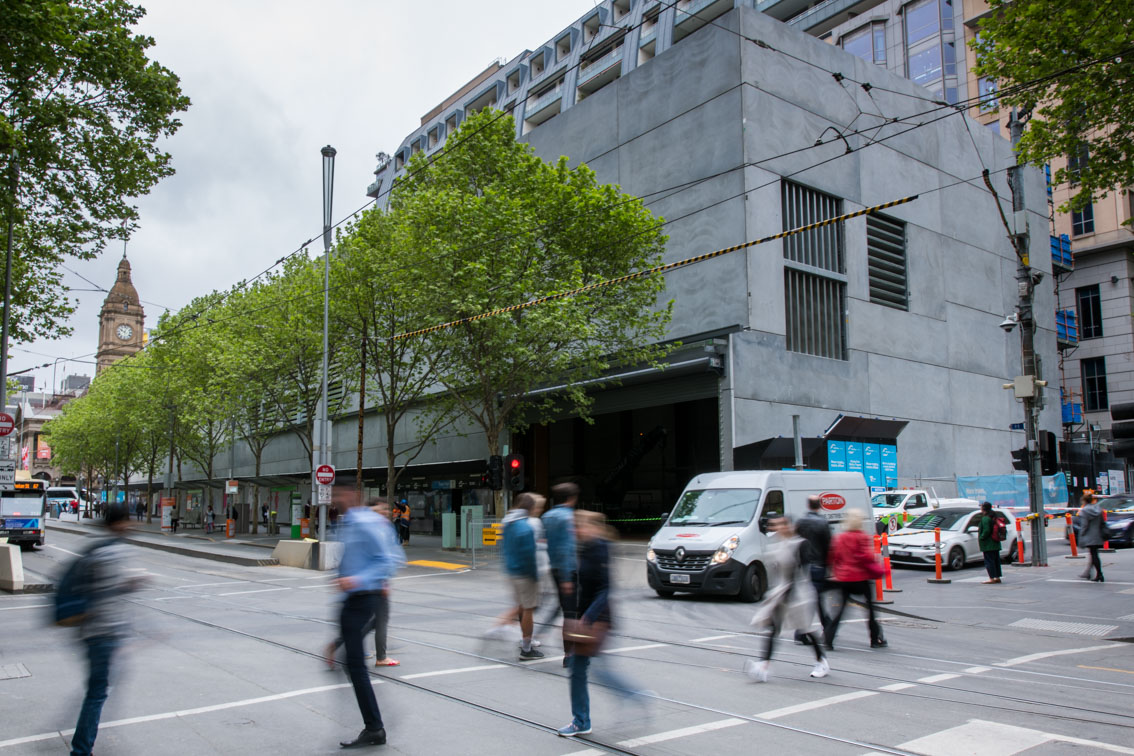 The use of mined tunnelling and underground excavation techniques will significantly reduce impacts on Melbourne's CBD, helping to ensure tens of thousands of workers, residents and visitors can continue to access Swanston Street while construction of the new tunnels and stations continues underground.

However, there will still be some unavoidable disruption at surface level and some changes to roads, tram services, and bicycle and pedestrian access will be required to deliver the project.

Other traffic changes at the northern end of the CBD include the permanent closure of A'Beckett Street to vehicle traffic at Swanston Street, and reduction in the number of traffic lanes on Franklin Street between Swanston Street and Elizabeth Street.

At the southern end of the CBD, partial closures of Flinders Street are required to construct the underground pedestrian connections linking Flinders Street Station and Federation Square to Town Hall Station. These works may impact traffic, trams and footpaths. The Flinders Street eastbound lanes have also been closed between Degraves Street and Swanston Street.

Tram services will continue to run during the Metro Tunnel's construction in the CBD, although some activities are likely to temporarily impact tram services along Swanston, Flinders, Collins and La Trobe streets. Construction activities in the CBD will be carefully managed to minimise disruption to pedestrians and cyclists, especially during peak periods.

Pedestrian and bicycle paths will be maintained around construction sites, and will include arrangements to direct pedestrians and cyclists safely around work areas.

Construction traffic routes for the CBD aim to move trucks and other construction traffic away from the city as quickly as possible, using major arterial roads such as Victoria Street, Wurundjeri Way, Dudley Street and the Exhibition Street extension.

Temporary traffic management measurements on the following roads will support construction of the new tunnels and stations:

These measures will typically involve signage, line marking and small kerb adjustments to provide a safer environment for cyclists, pedestrians and motorists during construction.

Permanent road works are proposed for parts of the following roads to improve the public realm as part of the project:

These works include footpath resurfacing, landscaping, adjustments to bus stops and new pedestrian and cyclist crossings.

These works also include an extension of the tram route from Elizabeth Street onto Flinders Street via new tram tracks. This will: