The new Anzac Station will significantly improve access to the St Kilda Road precinct and key Melbourne landmarks, reducing pressure on the road and tram network to the south of the CBD.

Anzac Station has been strategically placed to ease pressure on the St Kilda Road / Swanston Street tram corridor, which is the busiest tram corridor in the world. It will service thousands of train and tram users, pedestrians, cyclists and motorists every day.

The station will support the continuing growth and redevelopment of the South Melbourne / Kings Way precinct, and make it easier to visit some of Melbourne's most valued parks and attractions – such as the Shrine of Remembrance, the Royal Botanic Gardens and Albert Park. Anzac Station will be located directly under St Kilda Road near the intersection of Albert Road and Domain Road.

It will be accessed from four entry points. One entrance will be located on the outer edge of the Shrine of Remembrance Reserve, another at the Albert Road Reserve and two further entrances at the new Domain train / tram interchange directly above the station on St Kilda Road, which will feature a fully accessible tram superstop.

Map of the Anzac Station precinct

Anzac Station has been designed as a ‘pavilion in the park’ – an integrated public building and landmark that connects seamlessly with surrounding parklands.

The canopy above the tram interchange will be an architectural focal point, providing waiting passengers with year-round weather protection. A large skylight embedded in the tram stop will fill the station concourse below with natural light.

Albert Road Reserve will be expanded and enhanced as a community park, providing a green link between the Shrine of Remembrance Reserve, Domain Parklands, Albert Park and beyond to Port Phillip Bay.

The station location is the result of detailed investigations, design and planning by engineers, transport modellers and other experts with experience on rail tunnels and other infrastructure projects in Australia and around the world. Read more about the location assessment. 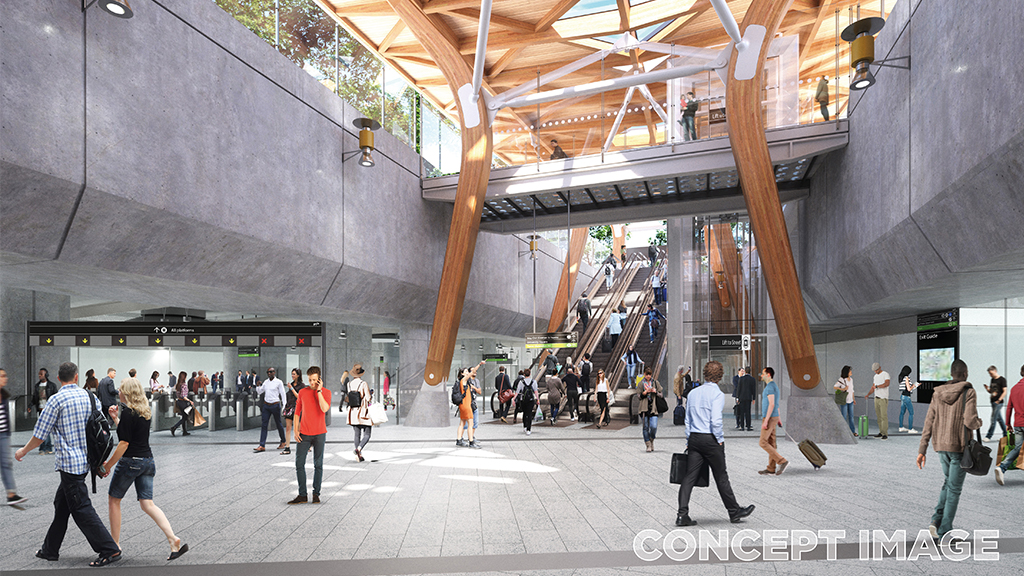 Getting to and from Anzac Station

St Kilda Road is one of the world’s busiest tram corridors and a popular route with cyclists. More than half of the passengers using the new station are expected to move between trains and trams. Station access features will include:

The project will increase overall tree canopy coverage in the station precinct, with new trees planted on St Kilda Road and in the surrounding area. The tram platform will also feature trees and dense, low-height landscaping.

Following detailed design work, the number of trees impacted in this area has been reduced from 224 trees to 170. In the Albert Road Reserve, the Windsor Oak has been protected, as have many of the existing elm trees.

Sloping down from the Shrine of Remembrance Reserve to Albert Park, the expanded Albert Road Reserve will be a biodiversity corridor, bringing nature into the city through diverse landscaping. Landscaping for St Kilda Road will use leading water sensitive design to capture and treat stormwater and provide passive irrigation. Water will be collected from surrounding roads and directed to the new Albert Road Reserve on St Kilda Road.

From Albert Road Reserve, the water will be filtered through landscaped areas to support tree and vegetation growth.

Important heritage features will be preserved, with the reinstatement of this section of St Kilda Road as part of Melbourne's grand boulevard, the reinstatement of Edmund Herring Oval as a place for recreation, and the restoration of the South African Soldiers Memorial within Albert Road Reserve.

Find out more about Anzac Station