We upgraded the Moray Street bike path to provide cyclists with a safe and reliable alternative north-south route during Metro Tunnel works on St Kilda Road.

This hybrid solution split the design of the Moray Street bike path into two sections. A two-metre wide protected bike lane was created along sections of Moray Street, running alongside the footpath, at road level. The bike lane is separated from traffic with a one-metre mountable kerb, keeping cyclists away from parked cars and moving traffic.

From Catherine Street to City Road, bikes still have a dedicated bike lane. However, vehicle access to the kerbside loading zones was maintained in this location.

From Albert Road to Coventry Street, a dedicated bike lane continues to run between the on-street parking and the traffic lane. Line marking was removed and enhanced to improve the existing bike path.

This solution allows the centre median to be retained and maintains as much on-street parking as possible. The upgrade includes the following key features to improve safety and usability.

Provides audio cue for drivers who move too close to the bike lane, and a buffer between cyclists and live traffic.

Line marking separation of 0.6m between the parked car and bike lane

The two roundabouts at Dorcas Street and Coventry were upgraded to a new and innovative protected design which gives pedestrians and cyclists right of way to allow for safe crossing.

How does it work?

Pedestrians use the raised zebra crossings as usual, and will have priority over cyclists and cars using the roundabout.

Cyclists follow the green paint around the outside of the roundabout and give way to pedestrians as usual at pedestrian zebra crossings. Cyclists have priority over cars using the roundabout.

Drivers give way to both pedestrians and cyclists when entering and exiting the roundabout. 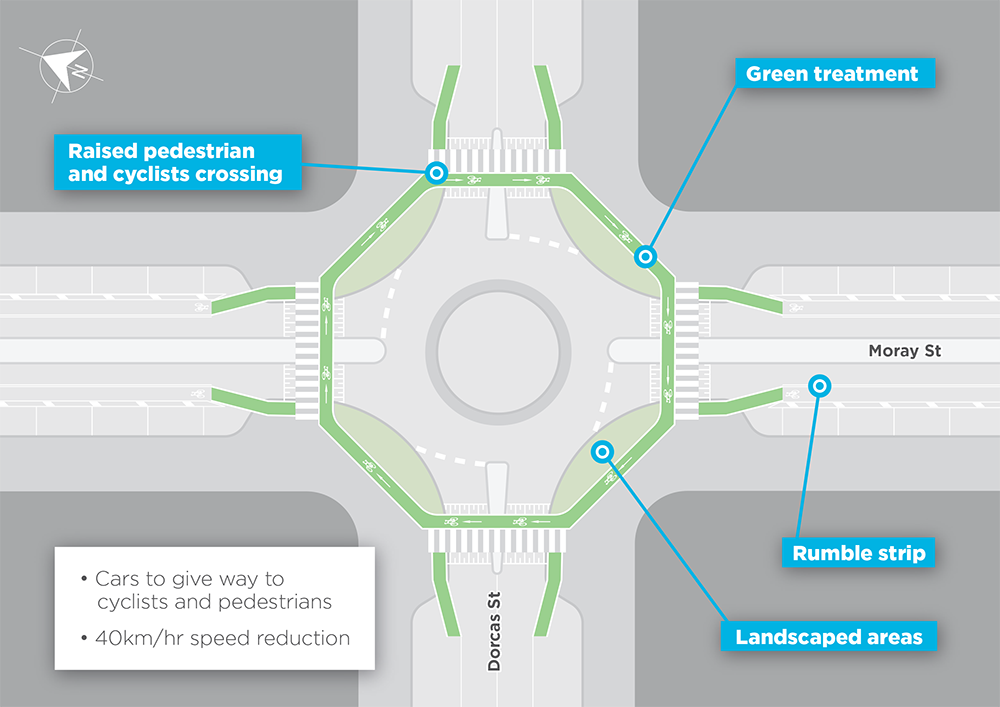 A bi-directional bike path was added under the bridge.

City of Melbourne is implementing new connecting bike lanes on Kavanagh Street as well as a shared path alongside the Boyd Community Hub to Kavanagh Street.

Improvements were made to the bike connection from Moray Street to Queensbridge Street, with green bike lane road marking.

The connection to Albert Road has been improved with green bike lane road marking and bike lantern signals.

Modifications were also made to pedestrian crossings and a dedicated bike ramp has been installed in the Albert Road median to enable better access from Moray Street into the Albert Road service lane.

In August 2017, we consulted with the community and asked for feedback on the two proposed design options for the Moray Street bike path upgrade.

You told us that the priorities are: safety of cyclists and pedestrians, minimising impacts on traffic, accessibility, adequate parking, and maintaining the look and feel of Moray Street.

The finalised design for the Moray Street Bike Path Upgrade incorporates the feedback we received during the community consultation period. The final design strikes a balance between the two proposed options, allowing us to best meet the needs of cyclists and the local community.